These are client-side commands for @import are:

The import process is explained by the following figure. 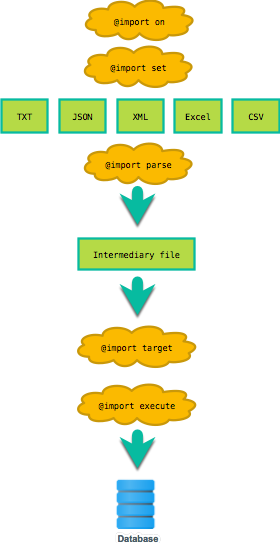 The @import parse step (1) lays the foundation for the database import as it based on the source file format (csv, json, xlsx, etc), parses the data to an intermediary and internal file. This file is then analyzed in order to detect widths, data types and their sizes based on the data, row and cell references back to the source file, and a lot more.

The intermediary format stores the input data as Records associated with information from where the data originates.

Once the data has been parsed some basic tests are performed to see if the properties of the data is compatible with the target table properties. E.g. if the size of the input data will fit the targeted table columns. This done when when the @import target command is run (2).

Final step of an import is to execute (3-4) the actual operations towards the database to import the data. I.e. execute the INSERT statements.
Any failures in the import will include specification of where in the source file the invalid data originates.

Following is a complete example where a simple CSV file is imported to a Target table Expenses.

The example shows how data about fruits included in a CSV file fruits.csv is imported into a database table fruits.

The example shows a minimal example where the columns of the CSV file is mapped directly to the table columns.

The SQL needed to import the file

Running the import script in DbVisualizer 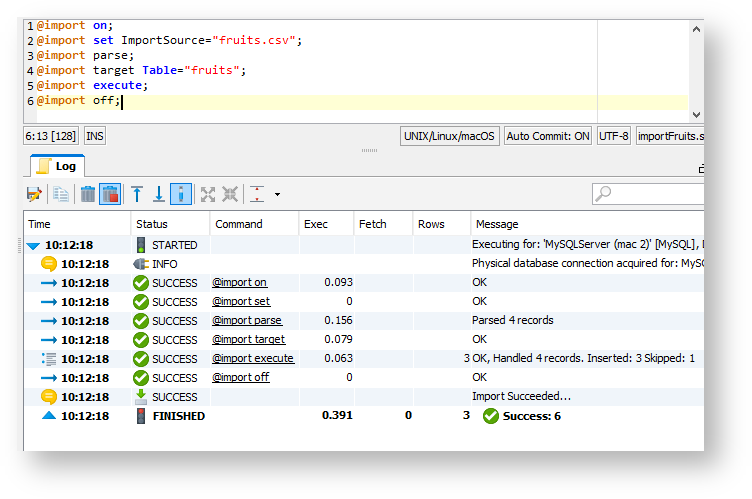 As seen in the screen-shot above 3 records were inserted and and 1 was skipped (the header).

Read further on in the guide for how you can tailor your import using the different parameters of the import commands.

These folders are automatically cleaned by DbVisualizer on regular basis.

Note: Normally there is no need to specify any parameters to the @import on command. Default values should be sufficient for most uses.

Import results are stored in PREFSDIR/importresults/newimport. If this directory exists the import will fail.

We  are starting to import data from row 5 of the source data file and skipping rows starting with "//".

The input data has header information at row 1. We are starting to import data from row 2.  As StartRowOfData is not explicitly set is automatically set to 2.

This command does all the parsing and analysing of input data.

The source data file is parsed. As a result result are stored in the location pinpointed by ImportResultDir.

The information shows the number of parsed records along with the number of columns found.  If the parsed file was a CSV file the used delimiter is printed.

For each column the following information is printed:

This command is responsible of all preparation of the target table prior to import. This includes dropping, truncating, deleting from and creating the table.

When this is executed a check is done if the input data will actually fit the table. This is done by comparing of the analyze result with the specified target and column mapping. Depending on the parameters the check is performed at different occasions.  Parameters for this command are:

As the table is dropped we need to supply the DDL/SQL for creation of the table.

The table is cleared before the import. The clear method is determined by DbVisualizer. For Databases supporting this Truncate is used.

Note that the first column of the CSV file is the brand name (Volvo) of the car. The table we are importing to have the columns in opposite order model, brand. I.e. we need to Map the columns.

CsvColumnDelimiter="!" specifying that the data is delimited by the character '!'.

SkipRowsStartingWith="BMW"  We are not importing BMW cars

When an input file is parsed DbVisualizer analyses the data to determine data types of the input data. The algorithm for this is quite coarse. DbVisualizer does offer a way to override the analysed data type.

Note that the birthday of "Lotta" is "NoData" which is of course not a valid date. When DbVisualizer parses/analyses the data, it will come to the conclusion that the BIRTHDAY column is a String.

The result of @import parse will contain a table describing information about the data that was parsed.

As mentioned earlier you can see that column BIRTHDAY has been interpreted as a String. This was found examining row 4 (FROM ROW column is 4).

In connection with inserting this column in the database DbVisualizer would insert/set this as a string. This would result in total import failure and no rows would be inserted in the database.

This may be addressed by overriding the analysed type for BIRTHDAY (String) and set the type to date.

The result of the import using the script above is that 3 rows are imported (August, Sven and Bert). The row representing Lotta is reported as a failure as Indicated below.

The resulting imported table is

Note how "LEMON" is imported without proceeding blanks. This is because column values are trimmed (TxtTrim parameter default is true).

The TxtColumns parameter supports a number of syntaxes as explained in the examples below.

An example when parsing a row "AAA BBB CCC"

Omitting the end index (as in the SQL script above)

Note how row 2 column B has the value #DIV/0!. This value represents a case where a cell is a calculated using formula where the calculation is producing an error.

ExcelSheetName="mydata"
Specifying that the sheet named mydata is is the sheet to import.

ExcelCellPolicyError="SKIP_ROW";
Specifies that if we find a formula that produced an error we should skip the complete row.

Note that row 2 is not imported as we instructed by ExcelCellPolicyError="SKIP_ROW";

Continuing an export that has failed

If any of the input data cannot be imported DbVisualizer will keep track of this. This is done by storing the failed data in a specific errorRecords.drec file in the directory where the import process stores its intermediate results (See ImportResultRoot parameter).

Following is an example were the export fails. It also shows how to import the failed data again. Specifically, the first import fails as Clementine is a name that is too long to fit in the target table column.

Note: the table definition for the fruit table defines the column name to be VARCHAR(6). The input data "Clementine" will not fit there.

ImportResultDir="/tmp/importContinueFirstImport" We get our results in this directory. Makes it easy to refer in the second import script.

SkipValidateJdbcTypes="VARCHAR"  Tells DbVisualizer not to validate VARCHAR columns. This is done for the purpose of this example. If not specified,  the import would stop before any data has been imported.

When running this import the Database used in the example (MySQL) will fail when the import tries to insert the data row 3 as Clementine will not fit the column. The Failure printed in the DbVisualizer Log for this looks something like:

Note that the source data is pinpointed as originating at row: 3.

The ALTER statement is dealing with the root cause why the import failed. The name column was too small.

Note that when continuing an import, the commands @import set and @import target is not specified. The settings and target from the old import is used.

ImportResultDir="/tmp/importContinueSecond": Specifying a separate directory for the results

The client-side import offers a way to run the import script to perform all client side data validation without changing anything in the database. This is done using the @set dryrun command.

Note that when running the import, without dry run, the import may fail nevertheless due to checks on the database side. E.g. primary- or unique key constraint checks.

When running the script, no actual clearing of the table will be done as the parameter CleanData indicates. Nor does the @import execute lead to any rows being inserted in the database.

Since there is a @set dryrun command prior to the commands no changes to the database table will be performed.