In addition to the DbVisualizer GUI tool, there is also a pure command line interface for running scripts. We recommend that you use this interface for tasks that you schedule via the operating system's scheduling tool, or when you need to include database tasks in a command script for a larger job. It is also the right tool for execution of large scripts, such as a script generated by the DbVisualizer Export Schema feature.

On Windows and Linux/Unix, you find this command as a BAT file (dbviscmd.bat) or a shell script (dbviscmd.sh) in the DbVisualizer installation directory. For macOS, the shell script is located in /Application/DbVisualizer-<Version>.app/Contents/Resources/app.

There are two options to to specify which database to connect to:

If you like to execute just a few statements, you can pass in a list of statements:

For other scripts, for instance a script containing INSERT statements, you may only want to see the log messages:

A text file (tables.txt) contains the table names we want to execute the SQL script with:

In a command shell (Bourne or Bash), we can then execute the script using the table names from the text file:

Note that you may need to escape certain characters that the shell would otherwise interpret, like the dollar signs that are part of the DbVisualizer variable delimiters.

Setting up the connection properties on the command line

Following are some examples.

An alternative to use the -drivername you may use the parameters -driverclass and -driverpath to specify the JDBC driver.

The above example connects to an Oracle instance on localhost and port 1521. Note that the separator character ':' between the different jar files is platform dependant. On Windows-based desktop platforms, the value of this field is the semicolon ";".

These are the exit codes when running dbviscmd

Generating a Command From SQL Commander

From time to time, you may want to use some SQL that you have tested in the GUI and run it in the command-line interface. You can generate the string with all parameters and paste that string on the command line or a script. Use menu option SQL Commander -> Generate Command for dbviscmd to open a dialog where you can specify the options. Some options are selected and some are disabled depending on the editor contents.

Besides the Command Line Options, there are a few settings in the dialog: 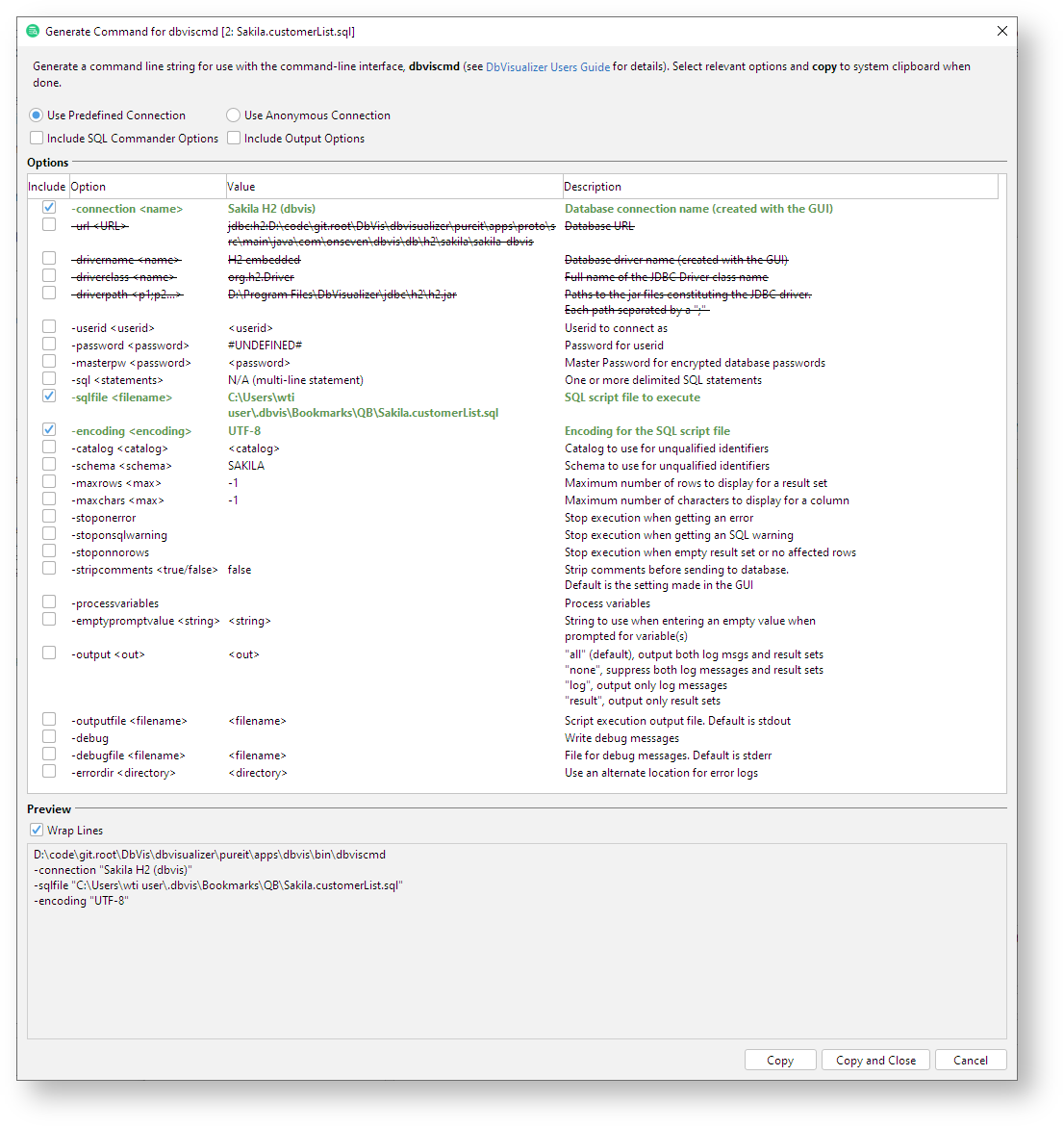