Extending the Commands and InitCommands elements is simple as every command should be uniquely identified. To add a Command just insert the new command.

Extending or modifying the database objects tree (ObjectsTreeDef) require some attention since the modifications must match the exact object paths as defined in the parent profile. The object path is determined by the GroupNode and DataNode structure in the ObjectsTreeDef with the addition of the type attribute. The following is an example of the object path to the Columns sub node for a Table node:

(The analyze database profile utility will report object paths in the above xpath format).

Consider the following example showing the objects tree (for Oracle) with the Schemas node being expanded to show all schemas in the database: 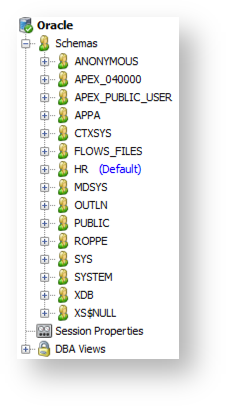 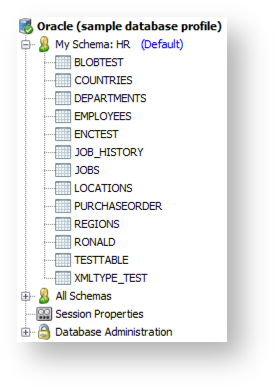 The previous screenshot shows the new My Schema: HR node at the top while the Schemas node has been renamed All Schemas. To accomplish the above a custom database profile has been created in the ${dbvis.prefsdir}/ext/profiles/sample-ext-oracle.xml file with the following content required for the ObjectsTreeDef definition:

The command above is used to present the default schema as in the following DataNode declaration.

As a sub node to the My Schema node there is the DataNode type="Table" definition for the Table object type. The complete declaration for the Table element and its sub elements has been copied from the parent profile:

The Table objects in the extended profile should not show any sub nodes such as columns or triggers and these declarations are then removed in the copied DataNode for the Table object. The isLeaf="true" attribute specifies that there will be no child nodes.

The new All Schemas node in the extended profile is supposed to have the exact same content and definition as in the parent profile when it was called Schemas. The following definition will just rename the label of the existing node.

In the parent Oracle profile there are no child nodes below User. To handle this all nodes from DBA down to User must be specified (aka the object type path). The only requirement is that the type attribute is specified and that it match the type in the parent profile. In addition, this example specify the label attribute for some of the nodes just to show that overridden attributes will replace any parent equvivalent node attributes.

The following are specified only to redefine the position of the Locks and Sessions nodes. One of order-before and order-after attributes are used to either identify a type for which the node should be positioned before or after, or an index. The index is the fixed position or 0 which means first or a somewhat high number means last. The following will move the Sessions first among the DBA child nodes.

Extending ActionGroup and Action elements follow the same rules as for extending ObjectsTreeDef section. The following example show removing the oracle-schema-stringsearch action for the Schema object type in the parent profile. A new ActionGroup: Extended Schema Actions is added with a single new Action: sample-schema-sample-action.

Removing an object in the parent profile is easy, just add the action="drop" attribute to any of GroupNode, DataNode, ObjectView, DataView, ActionGroup and Action elements. If there are any sub elements for the object being dropped these are also removed.